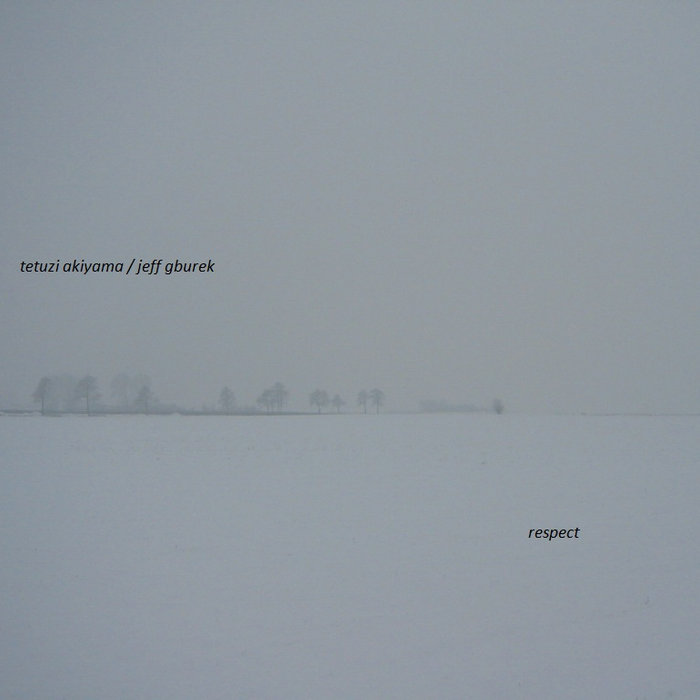 These recorded improvisations from 2010 are a portrait of an evolving musical relationship between two well-traveled musicians, one that began in Berlin in 2005 (documented on Lee Kwang's Herbal Records imprint), spanning two small tours in Germany and most recently renewed in Poland in 2008 and 2010 in Warsaw and Poznan). "Respect" captures quiet guitars and electronics interacting over a bed of silence, an intimate post-Feldman environment where breathing and room sound permeate the texture. The east/west hybrid interests of both players seem to inform the subtle harmonic framework and the hypnotic flow of events. Jeff Gburek (Poland) recalls that between recorded segments the duo discussed moods/imagery, undetermined but subliminal suggestions. "In the middle of nowhere, the desert..." was an idea for the second track, which sparked Gburek's “strong associative imagination with the New Mexico desert landscape and my sounds; because much of my sound vocabulary for that instrument set-up was developed while I was living in New Mexico.” Tetuzi Akiyama (Japan) had also been visiting New Mexico a few months before the recording, his slide guitar on that track perhaps redolent of the southwestern US or as equally his own signature of Setagaya section of Tokyo. Overall these four tracks invite the listener into a unified and compelling experience, a meeting of musical presences enabled by patience and a willingness to explore. The digipack CD includes two poems written by the players not as determining "statements" but rather reflections on overall conditions, past, present, futurological. Photography by Karolina Ossowska-Gburek of wintry desolation in Poland underscores the sonic landscapes. Recorded at Radio Afera Studio, Poznan, Poland with the kind assistance of Patryk Lychota.

"Guitar improvisations backed with light electronic touches, played with absolute attention to the potency of space and silence...."
- Hypnagogue
hypnagogue.net/2013/12/27/tetuzi-akiyama-and-jeff-gburek-respect/

"Concise and evocative. These are the first adjectives that came to mind as I was listening to Respect, the recorded fruit of a collaboration started in 2005 between two reciprocally regardful performers gifted with decency and finely tuned ears in equal doses. Four tracks condensing issues of silent communication, unsmooth light noise, intelligently unassuming electronic treatments and improvisational sinlessness with skill and humanity, the latter constituent frequently made audible thanks to the perceptible breathing informing selected quiet spots, captured by a very close positioning of the microphones..." - Touching Extremes
touchingextremes.wordpress.com/2013/04/09/tetuzi-akiyama-jeff-gburek-respect/

"One never quite knows what to expect from any project involving Akiyama but this one, a duo with the always intriguing Jeff Gburek, is pitched decidedly toward the quite and contemplatively sad. Akiyama is on acoustic guitar, Gburek on the same plus prepared slide guitar and electronics. The four pieces unfurl slowly and gently, plaintive tones squeezed out like tear, referring to blues traditions but in a way that's perhaps in the Connors lineage but removed a step or two, hazy in the distance like the tree line on the disc's cover. Polish cold marsh blues. Gburek is nicely chary with his electronic insertions, discreet sounds that sizzle on the edges of the guitars. The tone is consistent over the tracks, a welcome aspect, though the details vary more than enough, ensuring that each possesses an individual character. The music is genuine, quite approachable and just a pleasure to experience. No nonsense, heartfelt playing. Recommended."
- Just Outside
olewnick.blogspot.com/2013/03/tetuzi-akiyamajeff-gburek-respect.html