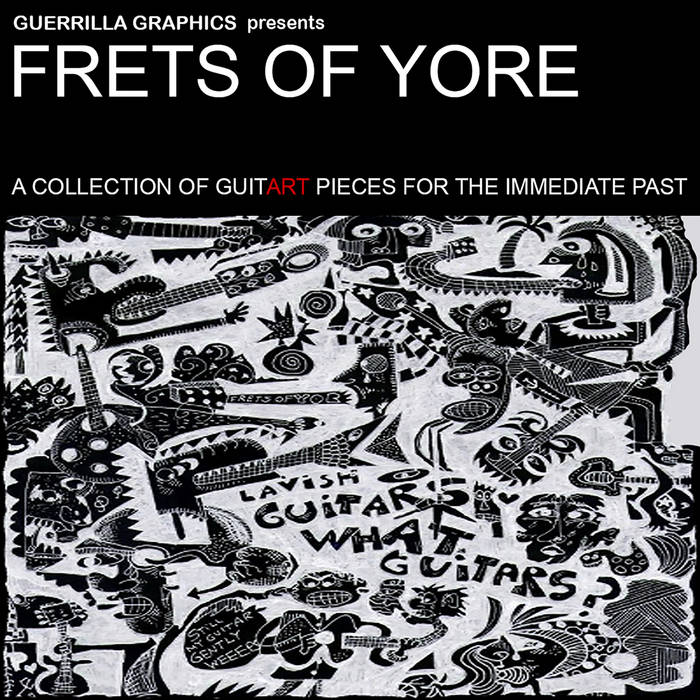 Spectropol is pleased to announce the upcoming release of Frets of Yore: A collection of guitART Pieces for the Immediate Past.

This compilation features musical responses to 26 graphic art works, each interpreted or reacted to twice, resulting in 52 guitar-based tracks spanning a wide range of styles. The graphic submissions included paintings, drawings, collage, digital manipulation, photography, and even a paper-cutting. Quirky acoustic compositions, European free improvisation, textural soundscapes, minimalism, noise, avant/RIO rock, Canterbury music and songs are among the approaches from the musicians, who include several major figures of the guitar world.

"Subtitled “a collection of guitART pieces for the immediate past,” the new compilation Frets of Yore is packed with wildly diverse guitar-based tracks and was created by having over 50 musicians react to 26 different pieces of visual art, with each piece being interpreted twice.

The result is an ever-changing, hugely imaginative smorgasbord, in the spirit of compilations such as Guitarrorists or The $100 Guitar Project from 2013 which has a roster that overlaps with Frets of Yore.

The collection’s international line-up ranges from the obscure to more well-known guitarists that often play at music’s fringes, including Elliott Sharp and Fred Frith. Most musicians on the compilation limit themselves and contribute tracks that solely use guitars, including one by Kalahari Surfers that sounds like its percussion beats were generated by striking a guitar’s body; however, a few tracks use additional instrumentation, and Carla Diratz’s number even features vocals.

Shawn Persinger’s “Mon (Dinosaur) Parc” is one standout, with the track’s first half featuring an unaccompanied acoustic guitar playing an irregular stream of notes, punctuated with harmonics. In its second half, a conversational field recording is added to the mix while the guitar part is repeated, revealing that the guitar’s melody and rhythm were derived by attempting to match the sounds of the voices as closely as possible, in line with that technique previously used by artists like Scott Johnson and Steve Reich.

Frets of Yore is a collection that keeps the listeners on their toes, with its relentless veering from the familiar to the unfamiliar, and if a track sounds unpalatable, one simply needs to wait a minute for something completely different."
-The Pulse

"‘Frets of Yore’ is an album of 51 miniature guitar pieces, inspired on graphic works supplied by 26 artists, with Danielle Dax, Carl Schenkel and Jad Fair among them. Each work served as a source for inspiration by two musicians, mostly guitarists. An incredible project realized in the second half of 2017, by Gonzalo Fuentes R, who did a giant job! Guitarists include Rene Lussier, Nick Didkovsky,Andre Duchesne, Fred Frith, Mike Cooper, Karl Blake, Kalahari Surfers and many others more or less of the same generation. There are not so much younger musicians involved, as far as I can overlook. All of them are experienced musicians who have their own vocabulary, etc. All pieces emerged from a spontaneous encounter with the visual work. Some of them were treated afterwards, others not. This is a project that inevitably brings the legendary ‘Miniatures’-project by Morgan Fisher to my mind. Likewise ‘Frets of Yore’ is a fascinating mosaic of a variety of contributions most of them under two minutes; a kaleidoscopic experience with some real beauties by Rene Lussier and Brian Woodbury (remembering his remarkable album ‘All White People look Alike’ from 1987)."
-Vital Weekly